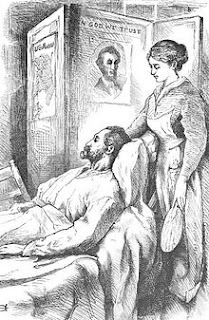 “Celebrating the Sesquicentennial of Louisa May Alcott's Hospital Sketches: A Teaching Round Table”

Published in 1863 to immediate success as the Civil War sloughed into its second year, Hospital Sketches is now available in several paperback editions, most with excellent introductions detailing its relevance in a variety of classrooms—from literature and history in general to women’s, gender, African American, and disability studies in particular. We seek abstracts describing successful classroom strategies that feature Hospital Sketches or that present Alcott as an important figure in antislavery reform, women's history, and popular literature of the Civil War. In which kinds of classrooms is Hospital Sketches an effective springboard for examining the development of the Women’s Central Association of Relief as an arm of the US Sanitary Commission, and for calling attention to the need for post-war freedmen’s education? How does Nurse Periwinkle’s increasing ambivalence toward the war enable us to provide students with a more realistic grasp of the human cost of this still too-often romanticized military conflict? How does Alcott’s treatment of racial themes in this text compare with similar considerations in her other work? How doesHospital Sketches usefully complement themes observable in other works that treat the Civil War, not only in Alcott’s writings but in those authored by other (and later) writers?
Please send brief abstracts to Sandy Petrulionis at shp2@psu.edu, by January 21, 2013.
Publié par Alexandre Klein à 08:05