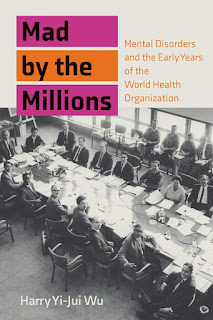 Mad by the Millions: Mental Disorders and the Early Years of the World Health Organization


In 1948, the World Health Organization began to prepare its social psychiatry project, which aimed to discover the epidemiology and arrive at a classification of mental disorders. In Mad by the Millions, Harry Y-Jui Wu examines the WHO's ambitious project, arguing that it was shaped by the postwar faith in technology and expertise and the universalizing vision of a “world psyche.” Wu shows that the WHO's idealized scientific internationalism laid the foundations for today's highly metricalized global mental health system.

Examining the interactions between the WHO and developing countries, Wu offers an analysis of the “transnationality” of mental health. He examines knowledge-sharing between the organization and African and Latin American collaborators, and looks in detail at the WHO's selection of a Taiwanese scientist, Tsung-yi Lin, to be its medical officer and head of the social psychiatry project. He discusses scientists' pursuit of standardization—not only to synchronize sectors in the organization but also to produce a common language of psychiatry—and how technological advances supported this. Wu considers why the optimism and idealism of the social psychiatry project turned to dissatisfaction, reappraising the WHO's early knowledge production modality through the concept of an “export processing zone.” Finally, he looks at the WHO's project in light of current debates over psychiatry and global mental health, as scientists shift their concerns from the creation of universal metrics to the importance of local matrixes.